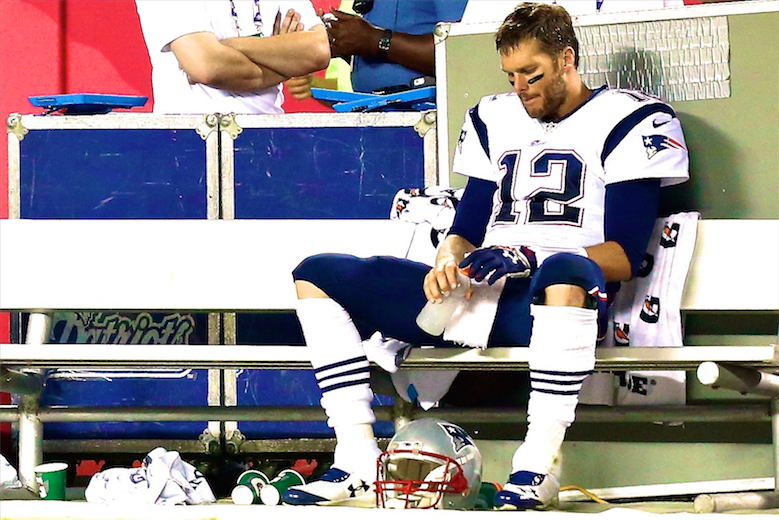 There are reports all over the place saying Brady isn’t committed to playing in 2018. There are just as many saying Gronk wants to trade in the football spike for spiking bodies in the WWE. Amendola comes out and says Billy B is an asshole. As a Patriots fan, since I came out of the womb, I am shitting my pants. This seems like the end, and all the cocky, nose-up, high-horse talk when the Pats or the NFL come up in conversation is about to go with it.

There’s a few things I want to point out here. First, Billy B is the greatest coach of all time. End of story. Even if he is a Grade A doucher. He had been the same man since he got the head coaching job in 2000. He’s been demanding players to play through injuries, practicing in the snow, and ditching fan favorite players just before their inevitable decline. Veterans knew what they were getting into and rookies wanted to play for a winning franchise. So what happened? Why is it falling apart now?

The Jimmy G situation changed it all. Belichick wanted to trade Brady, get most likely some solid defensive talent with the draft pick received, than hit the 2018-2019 season in full force. In doing that, he’d prove that he could win without Brady. He would retire to Florida, play golf, and make what I assume to be very boring and unemotional sex with Linda. Brady and Belichick have never gotten along. But, the head honcho was not about that. He loves Brady. Considers him a son and wants him to finish his career in New England, even if that threatens the future of franchise. Bill didn’t have it and flipped his shit. It’s been a professional relationship between Bill and Tom, but two type A champions are going to hate each other eventually. And with Kraft taking Tommy’s side, Billy went on a rampage. Telling Alex Guerrero and the rest of the TB12 method staff to get the fuck out. Turns out, more than just Brady was using Alex and now that pisses those players off, Gronk included, who has notably been frustrated with Billy’s stance on injuries. They end up losing the super bowl to a back up QB and that was the catalyst for the shit parade to start marching on.

So that brings us to now. The offseason, right before the draft. Gronk is at Gillette, not for workouts, but to watch motorcross. Tom is in Oman looking stoic with his perfect fucking family on instagram. ESPN reports that Tom hasn’t committed to play. Very well could be ESPN making shit up to stir the pot, but let’s assume its true because it fits the narrative. Billy B trades Cooks to get another pick in the first round. Supposedly they love Lamar Jackson (as a Clemson fan, think he’s a little overrated), and 23 is right in the sweet spot to land him. We have holes all over the field including RB and LT. We have no pass rush and our defensive backs are either gone (Malcom Butler) or suck. It’s over. Unless somehow bridges can be rebuilt, its over. Brady will finish out his contract and then he will be gone, if he makes it that long.

The Draft is going to be a huge sign as to what’s going on. If the Pats move up further, or take a QB at 23 or 31, then we know what’s been said above is true and Brady is going to shit a brick. In that case, maybe he retires out of spite. Making the rookie come in or turn over the reigns to Hoyer, in a ghastly symbol of refusal to mentor his future replacement. If the Pats go with a receiver or some D help, then what I have said is probably partially true, but that Brady and Billy have agreed to put shit aside to win again.

Either way, it’s coming to an end. As a Boston sports fan growing up, I hit the lottery. Every team won including the fucking MLS team who no one cares about and the Boston Cannons… the MLL team. Red Sox. Celtics. Bruins. But most importantly, Patriots. The never seen before absolute dominance of a major sports league. I don’t know if something like this will ever happen again.

Count your blessings. Say your prayers, Pats fans. I think its coming to an end.